With a strengthening economy and low unemployment comes a potential labor crisis.

Companies in Lehigh and Northampton counties are hiring and plan to continue hiring over the next year, but if the problem of finding the skilled workers necessary to fill these positions persists and nobody takes action to address the issue, the region could see a deficit of nearly 10,000 workers over the next decade.

Over the next decade, the number of baby boomers leaving the workforce is 90,665, while the number of incoming workers is 80,673.

That’s according to the Lehigh Valley Economic Development Corp., which Thursday afternoon released the final report of a yearlong regional study that polled more than 300 companies in Lehigh and Northampton counties on questions related to skill needs, hiring plans, workforce challenges and other factors.

With Lehigh Valley-specific data in hand, economic development and workforce officials say they are poised to capture a greater understanding of how to find the right people for the right job. 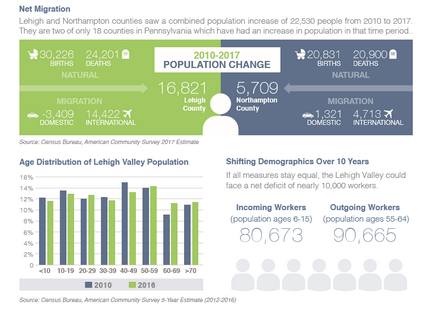 “This data is the first time we’ve had Lehigh Valley specific data,” said Don Cunningham, president and CEO of LVEDC. “It’s really saying the Lehigh Valley is in the category of most of the strong growth regions in the country. Demand for skills is increasing.”

At an event that attracted about 200 people to the Blue Grillhouse event center in Bethlehem Township, officials involved in the Education & Talent Supply Study disclosed the findings from the data they gathered over the year. State grants funded the majority of the study.

The Education & Talent Supply Council formed in 2015 to meet, discuss and work on these labor issues and had participation from local schools and colleges, said Mark Erickson, president of Northampton Community College and chairman of the council.

In 2017, LVEDC and the Workforce Board Lehigh Valley hired MDB Insight, a Toronto consulting firm, to conduct the study that included interviews, focus groups and surveys with businesses from five targeted industry sectors and other stakeholders.

That same year, LVEDC hired Karianne Gelinas for a newly created position, director of talent supply. Gelinas helped to gather the data and worked closely with the council.

The targeted sectors are manufacturing; high-value business services; life sciences; transportation, warehousing, logistics and wholesale; and health care. The data are only from companies in these fields, and the council chose these sectors because they said they demonstrated the greatest employment needs.

“They already employ a large sector of our workforce and they are poised for growth,” Gelinas said.

Having strategies to help these growing employers is critical to the region’s economic health, Gelinas said.

COMMUTING IN AND OUT

The study also used Census Bureau data, which showed there are more Valley residents commuting outside the region to work than there are out-of-area commuters coming into the Valley to work.

“That number used to be way out of balance,” Cunningham said, saying many more residents commuted out of the Valley to work elsewhere. The council would like to broadly identify those 99,138 people leaving the Valley each day to work, their skills and where they are going, he added.

LVEDC, an organization focused on attracting new companies to the Valley and retaining existing ones, is finding that businesses are increasingly more concerned with the quality of the available workforce than they are location, according to Cunningham.

“The availability of skilled labor and gaps between existing workforce and skills that today’s employers need are critical economic challenges,” he said. “This is not just a Lehigh Valley issue.

“It’s a common concern in growing communities across the United States during a period of rapid technological change and historically low unemployment levels.”

A majority of surveyed employers said they have had difficulties hiring. The study showed 71 percent said their company has experienced challenges in recruiting, hiring or retaining workers over the past year.

The study also showed 91 percent of employers said they have hired workers within the past year, and 89 percent said they plan to hire within the next 12 months.

“The constant that we see across all our clients is, the skills gap affects everyone,” said Susan Larkin, vice president of Allied Personnel Services, a staffing agency in Allentown and presenting event sponsor. “The need for this study is clear.”

Larkin said she has not seen a labor market like this one. Her firm has experienced many different labor markets over the years and is one of the Valley’s largest employers.

Now with the survey complete and the data released, the council will examine 36 recommendations that MDB Insight identified, including nine that LVEDC views as the highest priority for taking immediate action.

These include conducting more tours of local businesses for the community and school officials, developing a more targeted mentorship program and finding out where residents go who leave the region for educational opportunities elsewhere. The full study and recommendations are available at LVEDC’s website.

“We are trying to look forward and put some framework in place,” Cunningham said. “We have to understand it to be smart.”

Did you know that today marks the birthday of Bugs Bunny?  There’s a lot to learn from this rabbit… 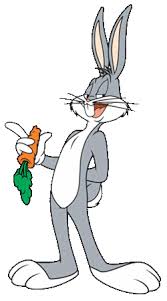 1) Be curious.  His “What’s Up Doc” catchphrase teaches us to be inquisitive of others.
2) Be fearless.  Bugs was brave, he was never shy, and he was quick to match wits with anyone giving him a hard time.
3) Be a creative problem solver.  There was never a pickle Bugs couldn’t find his way out of.
4) Be prepared.  Bugs always knew what his pursuer (usually Elmer) was plotting and planned and prepared to remain two steps ahead of him.

Feeling nostalgic for Bugs and his buddies (Elmer, Sylvester, Yosemite Sam, Foghorn Leghorn, Daffy…)? There is no better rabbit hole on YouTube to fall into than Bugs’.